SMALL AND EASY TO TAKE, JUST ONE TABLET PER DOSE EISAI TO LAUNCH “ONJI-NO-MEGUMI” FOR IMPROVING FORGETFULNESS IN MIDDLE AGE AND BEYONDSUPPORTING THE POWER OF MEMORY

Onji-no-Megumi is a category-3 OTC drug containing onji extract, which is indicated for “improving forgetfulness in middle age and beyond.” Onji is an herbal medicine made from the dried roots of Polygala tenuifolia, mainly known for improving functions related to memory. Onji-no-Megumi is miniaturized herbal formulation which only requires one tablet per dose. Additionally, the tablet is coated to suppress the distinctive bitter flavor of herbal medicines, making it easy to take.

Based on a survey carried out by Eisai, over 40% of people aged 40 and over experience episodes of forgetfulness, such as “being unable to recall the name of a person or thing” or “mentioning the same thing over and over”, and this makes them feel uneasy. However, at present, forgetfulness is considered to be natural consequence of aging and is thus difficult to treat. Onji-no-Megumi can be used to improve the memory functions of middle aged and older people who are concerned about forgetfulness.

Eisai is proactively engaged in spreading awareness of dementia and forgetfulness as well as in community building activities to support collaboration between stakeholders such as government, medical and care facilities.
Through the delivery of this product, Eisai seeks to further contribute to increasing the benefits provided to those who are concerned about forgetfulness, even in the area of self-medication.

3.Indications and Usage: Improving forgetfulness in middle age and beyond. 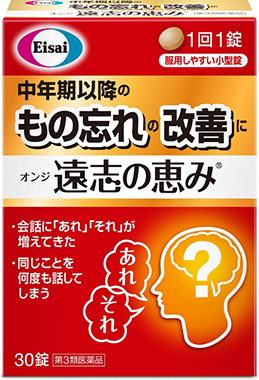 Onji is an herbal medicine made from the dried roots of Polygala tenuifolia. The name “onji” was recorded in the Compendium of Materia Medica, a classic Chinese text on medicinal plants, where it was named for its benefits of “increasing wisdom and strengthening will” and its powerful medicinal effect on the neuropsychiatric system. It was also found in the Shennong Ben Cao Jing, the oldest known Chinese medical text, and has historically been used in kamiuntanto (gallbladder warming decoctions), kamikihito (spleen restoration decoctions) and ninjinyoeito (ginseng nutrition decoctions).