This product is a fine granule formulation that can be adjusted to account for age and body surface area for administration to pediatric patients, and can be administered to patients who have difficulty taking tablets. In addition, Eisai has made special efforts, such as reducing the bitterness, to make Tambocor Fine Granules easy to administer.

Pediatric arrhythmia not only causes heart palpitations, dizziness, shortness of breath and other symptoms that impact the daily lives of patients, it is also said to be one of the most common causes of sudden death among children. Regarding pediatric arrhythmia, Eisai has received approval of additional indications for pediatric patients for Tambocor Tablets in May 2010, and for the calcium channel blocker Vasolan® Tablets 40 mg and Vasolan for intravenous injection 5 mg in May 2011. By providing the easy to measure and administer Tambocor Fine Granules 10% in addition to Tambocor Tablets, Eisai will continue to make further contributions to address their needs of patients with tachyarrhythmia. 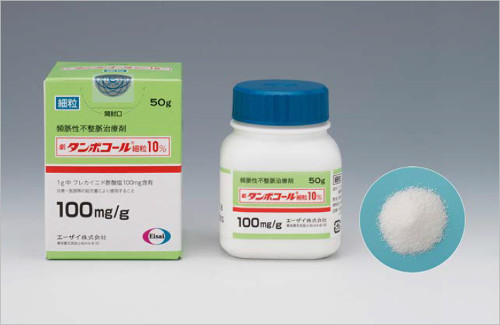