Pariet is marketed in Japan as a treatment for gastric ulcer, duodenal ulcer, reflux esophagitis and other gastroenterological diseases, and is currently available as 10 mg and 20 mg tablets as well as in triple formulation combination packs Rabecure® Pack and Rabefine® Pack for Helicobacter pylori eradication. Pariet Tablets 5 mg, the smallest tablet among all existing proton pump inhibitors, was developed specifically for the additional indication of prevention of recurrent gastric or duodenal ulcers caused by low-dose aspirin therapy. This new indication was approved in December 2014 with a four year Reexamination Period.

In recent years, the aging of Japan's population has led to an increase in the number of patients requiring long-term low-dose aspirin therapy to prevent recurrent thrombotic events in the heart or brain. As low-dose aspirin administration is associated with the risk of developing gastrointestinal hemorrhages and peptic ulcers, it is important to manage such risks so that patients can continue to receive treatment in order to prevent cardiovascular and cerebrovascular events.

Through the launch of Pariet Tablets 5 mg, Eisai aims to contribute to the prevention of recurrent peptic ulcers in patients undertaking low-dose aspirin therapy, and also to increase the clinical value of the drug so as to further contribute to the range of treatment options available to patients with acid-related diseases. 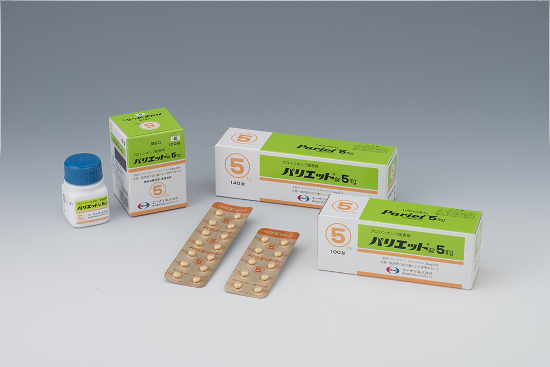 Pariet is a proton pump inhibitor (PPI) that was discovered and developed by Eisai. First launched in Japan in 1997, it is approved in more than 100 countries and regions worldwide. In Japan, Pariet is available in 10 mg and 20 mg tablet formulations and is indicated for the treatment of various gastrointestinal disorders, such as for the treatment of gastric ulcer, duodenal ulcer, reflux esophagitis, non-erosive gastroesophageal reflux disease, and as an adjunctive therapy in Helicobacter pylori (H. pylori) eradication in patients with gastric ulcer, duodenal ulcer, or H. pylori gastritis. Furthermore, in February 2014, the company launched triple formulation combination packs containing Pariet Tablets 10 mg for H. pylori eradication, Rabecure Pack (for primary H. pylori eradication), and Rabefine Pack (for secondary H. pylori eradication).

In December 2014, Pariet was approved for the additional indication of prevention of recurrent gastric or duodenal ulcers caused by low-dose aspirin therapy. In addition, the company is conducting a Phase Ⅲ study on Pariet in Japan as a maintenance therapy for patients with reflux esophagitis resistant to PPI treatment.