The study was a double-blind, randomized, placebo-controlled, multicenter, parallel-group study to evaluate the efficacy and safety of adjunctive Fycompa therapy in 164 patients aged 12 years and older with uncontrolled PGTC seizures receiving one to a maximum of three anti-epileptic drugs (AED). Patients were randomized to receive Fycompa or placebo in a 1:1 ratio. Analysis of the study demonstrates that Fycompa significantly reduced PGTC seizure frequency (primary analysis for the U.S.) and improved responder rates (the percentage of patients who experienced a 50% or greater reduction in PGTC seizure frequency, primary analysis for the EU), the study's two primary outcome measures, when compared to placebo. In this study, the most common adverse events (>10% in the Fycompa arm and greater than placebo) were dizziness, fatigue, headache, irritability and somnolence. The adverse event profile observed in the study was similar to that observed in other studies with Fycompa.

Based on the results of this study, Eisai plans to submit applications during the first half of fiscal 2014 to health authorities in the EU and the U.S. for an indication expansion to include the adjunctive treatment of PGTC seizures. Furthermore, a clinical study on patients with partial-onset seizures (Study 335) is currently underway in Asia (including Japan), and Eisai plans to submit regulatory applications in Japan based on both of these studies in fiscal 2015.

Fycompa is a first-in-class AED discovered and developed by Eisai. With epileptic seizures being primarily mediated by the neurotransmitter glutamate, the agent is a highly selective, noncompetitive AMPA receptor antagonist that reduces neuronal hyperexcitation associated with seizures by targeting glutamate activity at postsynaptic AMPA receptors. Fycompa is approved in more than 35 countries primarily in Europe and North America, and has been launched in the U.S., Europe and Canada as an adjunctive treatment for partial-onset seizures (with or without secondary generalized seizures) in patients with epilepsy aged 12 years and older.

Eisai defines epilepsy as a therapeutic area of focus and by providing multiple treatment options in addition to Fycompa as part of an extensive epilepsy product portfolio, Eisai seeks to make continued contributions to address the diverse needs of, as well as increasing the benefits provided to, patients with epilepsy and their families.

Fycompa (perampanel), a novel chemical entity discovered and developed by Eisai, is a noncompetitive AMPA-type glutamate receptor antagonist. Fycompa is an AED that reduces neuronal hyperexcitation associated with seizures by targeting glutamate activity at postsynaptic AMPA receptors. The agent is currently approved in more than 35 countries and territories, including Europe and the U.S., as a treatment (once-daily oral dose) of partial-onset seizures and is also being evaluated in a Phase Ⅲ study in Asia, including Japan. Furthermore, Eisai is conducting Phase Ⅱ studies in Europe and the U.S. for partial-onset epilepsy in pediatric patients, as it seeks to expand the drug's range of approved indications.

Epilepsy reportedly affects nearly 1 million people in Japan, 2.4 million people in Europe (G5), 2.2 million people in the U.S., and more than 50 million people worldwide. Epilepsy is broadly categorized by seizure type, with partial-onset seizures accounting for approximately 60% of epilepsy cases and generalized seizures accounting for approximately 40%. Primary generalized tonic-clonic (PGTC) seizures are one of the most common and most severe forms of generalized seizures, accounting for approximately 60% of generalized epilepsy and approximately 20% of all epilepsy cases.1 For the majority of patients, a PGTC seizure begins with a loss of consciousness without any prior warning symptoms and a sudden contraction of the tonic muscles, causing the patient to fall down (tonic phase). This is followed by violent convulsions (clonic phase) until the muscles finally relax, and the patient is left with a disturbance of consciousness. As this is a serious event, it is seen as a major hindrance on daily life. While the seizure generally only lasts a few minutes, the patient will often feel confused, groggy or drowsy for a short period of time before returning to normal. 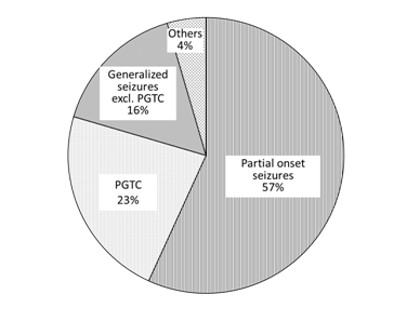