H3 Biomedicine will undertake the development of drugs for some of the most challenging cancers by integrating a new understanding of the genetics of patients' cancer with advances in synthetic organic chemistry. The company's drug discovery strategy is aimed at creating breakthrough cancer drugs that are more precise and efficacious than existing therapies based on two principles: 1) the identification of drug targets that define the root cause of the cancer by leveraging genetic characteristics of individual cancer patients and state-of-the-art bioinformatics technology and cancer biology, and the proper validation of these as target molecules; 2) the utilization of next-generation synthetic organic chemistry to create an innovative compound library that will pave the way for the development of novel small-molecule drugs against targets that are considered challenging or “undruggable” using traditional drug discovery approaches. H3 Biomedicine seeks to streamline preclinical and clinical research and significantly shorten the overall development time through the prospective use of cancer patient genetics to swiftly and effectively conduct biomarker research.

H3 Biomedicine was established in December 2010 in Cambridge, Massachusetts as a subsidiary of Eisai's U.S. pharmaceutical operation Eisai Inc. Home to one of the world's leading biotechnology clusters and world-class scientific talent, Cambridge provides an ideal backdrop for companies who seek the speedy exchange of the most up-to-date information and to engage in cutting-edge drug development. While H3 Biomedicine currently comprises a 24,000 square foot (approximately 2,200 square meters) research facility that houses state-of-the-art equipment, from fiscal 2012, the company plans to expand its laboratory space and eventually build a world-class team of approximately 70 staff. Eisai has pledged to provide H3 Biomedicine with up to US$200 million in research funding.

Eisai not only shares in H3 Biomedicine's scientific vision of breakthrough genomics-driven drug discovery and respects the company's free-spirited corporate culture and uniqueness as a bio-venture company, it also seeks to promptly discover innovative drugs and make contributions at a global level to people living with cancer through a new collaborative business model that is ideally suited to the operational and fiscal demands of this long-term commitment.

In October 2011, Markus Warmuth M.D. was appointed as President and CEO of H3 Biomedicine. Dr. Warmuth brings with him industrial experience in analytical research into cancer drug-resistance mechanisms, which he has accumulated through his career as a physician and role as a leader of a pharmaceutical company cancer drug discovery research team. His abundant experience and accomplishments in drug discovery, cancer biology and clinical oncology will serve him well as he leads the team at H3 Biomedicine.

H3 Biomedicine's scientific founders are renowned researchers Stuart L. Schreiber, Ph.D., and Todd R. Golub, M.D., who are serving as academic advisors to the company. As founding members of the Broad Institute of Harvard and MIT, Drs. Schreiber and Golub have transformed the way medical and cancer genomics research is done. Dr. Schreiber's research has had a significant impact on chemistry, biology, and medicine. As one example of his accomplishments, three cancer drugs that target cancer proteins discovered by Dr. Schreiber have been approved in many countries. Dr. Golub is the world leader in the genomic characterization of cancer, and has pioneered the use of genomic approaches to cancer research. Under the strong leadership of Dr. Warmuth, H3 Biomedicine will fully leverage the wealth of knowledge and experience of the scientific founders in its innovative drug discovery activities.

Eisai defines oncology as an area of therapeutic focus, and is engaged in product creation activities that place emphasis on the discovery and development of naturally-derived, antibody, small molecule, and genome-based drugs. With the addition of H3 Biomedicine to its existing product creation function, Eisai will accelerate the development of naturally-derived, antibody and small molecule drugs based on cutting-edge cancer genomics as it seeks to make contributions to patients and families living with cancer.

[ Please refer to the following notes for further information on H3 Biomedicine, H3 Biomedicine's drug discovery strategy, characteristics of Eisai Oncology, and Eisai's research activities in the Boston area, as well as a photograph of the opening ceremony ]

H3 Biomedicine Inc. is a biopharmaceutical company that specializes in the discovery and development of cancer drugs to facilitate personalized medicine. The company seeks to develop therapies for drug targets that are expected to be highly efficacious in the treatment of certain cancers based on genetic information that defines it root cause.

H3 Biomedicine's approach to drug discovery is based on two principles. The first principle is the identification of genetic candidates that define the root cause of the cancer by honing in on the genetics of patients' cancer and leveraging bioinformatics technology. After validating the function of the identified gene, target molecules for cancer treatment are selected and optimal assays are developed. The second principle involves the persistent pursuit of the correct target molecules even though they are considered challenging or “undruggable” using traditional drug discovery approaches. To achieve this end, H3 Biomedicine will utilize a next-generation synthesis technique known as Diversity-Oriented Synthesis (a synthesis technique that uses a natural substance as a structural motif to systematically and simply create a skeletally-diverse set of small molecules) to strike a balance between structural complexity and ease of synthesis as it seeks to create a unique library of skeletally and stereo-chemically diverse compounds. Furthermore, by prospectively using cancer patient genetics to swiftly and effectively conduct biomarker research and facilitate personalized medicine, H3 Biomedicine will shorten drug development time as it seeks to ensure the early delivery of innovative new drugs to patients battling cancer. 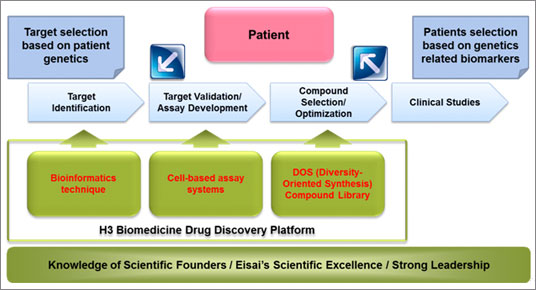 Eisai defines oncology as a therapeutic area of focus that is characterized by a diverse range of product creation activities, a commitment to women's oncology and an emphasis on East Asia. The company's product creation activities are focused on the discovery and development of naturally-derived, antibody, small molecule, and genome-based drugs. With the addition of H3 Biomedicine to its existing product creation function, Eisai seeks to accelerate the development of naturally-derived, antibody and small molecule drugs based on cutting-edge cancer genomics and improve its probability of success in this arena. In the field of women's oncology, Eisai is concentrating its efforts on the indication expansion of Halaven (Phase III: breast cancer with fewer prior treatments, etc.), farletuzumab (Phase III: ovarian cancer) and lenvatinib (Phase III: thyroid cancer; Phase II: endometrial cancer). Eisai is also expediting the development of anticancer agents to treat cancers such as hepatocellular carcinoma and non-small cell lung cancer.

Boston, Massachusetts is home to academic institutions such as Harvard University and MIT, numerous state-of-the-art medical facilities, and one of the world's leading biotechnology clusters, bringing together world-class scientific talent as well as the most cutting-edge and up-to-date information. Eisai has a long-standing presence in this area and has concentrated on enhancing collaborations with academia over the years. In 1989, the company established the discovery research facility Eisai Research Institute of Boston (currently Eisai Inc., the Andover Site) in Andover, Massachusetts. Efforts at the Institute were led primarily by renowned organic chemist Professor Yoshito Kishi and focused on the discovery of compounds with the potential to be developed into new drugs. The facility was also responsible for the discovery of the novel anticancer agent Halaven (eribulin), which is considered a masterpiece of synthetic organic chemistry. The Andover site is currently carrying out research in the fields of oncology and inflammatory disease, and employees a total of approximately 220 staff. In 1997, with the objective of promoting the development of scientific technology and facilitating further educational exchange between Japan and the United States, Eisai donated 100 million yen towards the establishment of a research wing, known as the Naito Building, at Harvard University's Department of Chemistry and Chemical Biology (Cambridge, Massachusetts). The company has continued to send its researchers to work at the facility as a means of fostering talent and enhancing its collaborations with academia. 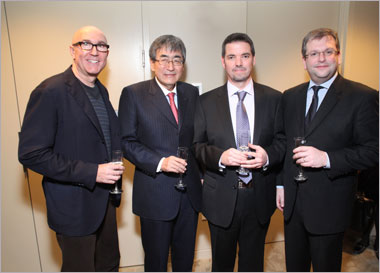