Eisai Canada was established in Mississauga, Ontario, one of largest biopharmaceutical clusters and medical communities in North America, in April 2010 as Eisai's first pharmaceutical sales base for the Canadian market.

Having commenced fully-fledged operations earlier this year, Eisai Canada has already launched the antiepileptic agent Banzel™ as well as the chemotherapeutic implant Gliadel® Wafer for the treatment of certain malignant brain tumors, and has filed a New Drug Submission (NDS) with the Canadian regulatory authorities for the anticancer agent Halaven®, one of Eisai's major global products. From next year onwards, Eisai Canada also plans to submit NDSs for the AMPA receptor antagonist perampanel (generic name) and a range of other additional new products in the fields of oncology and neurology, Eisai's defined areas of global therapeutic focus, thereby expanding its Canadian product portfolio.

As part of the company's great globalization strategy set out in its mid-term strategic plan “HAYABUSA”, Eisai seeks to establish a presence in each of the world's top 20 largest pharmaceutical markets, including Canada, by fiscal 2015 in an effort to achieve its objective of making contributions to more than 500 million patients worldwide. By enhancing its sales capabilities with the start of full-scale operations at Eisai Canada, Eisai will further expand its business in Canada, the world's ninth largest pharmaceutical market, and roll out marketing activities tailored to the needs of the local marketplace as its seeks to increase the benefits provided to patients and families throughout the country.

[ Please refer to the following notes for an outline of Eisai Canada, further information on Eisai's Great Globalization Strategy and the Canadian pharmaceuticals market, and a photograph of the official opening ceremony. ]

In this era of great globalization, Eisai seeks to establish a presence in all of the world's top 20 largest pharmaceutical markets as part of its mid-term strategic plan “HAYABUSA” as it aims to dramatically expand the cumulative number of patients it serves from just over 200 million in the FY2006-2010 period to more than 500 million over the five year period between FY2011 and FY2015. Of the eight countries (Canada, Brazil, Russia, Australia, Turkey, Poland, Mexico, and Venezuela) Eisai announced its plan to enter in its mid-term strategic plan “HAYABUSA” which was launched in March 2011, the company has established to date new sales subsidiaries in Australia (January 2006), Canada (April 2010), Brazil (April 2011) and Mexico (August 2011). The company has also opened a representative office in Russia in October 2007, where it is currently in the process of completing product registration procedures.

3.About the Canadian Pharmaceutical Market

With a population of approximately 34 million people, Canada is highly stable nation with a real GDP growth rate of 3.3%, in line with other leading industrialized countries. Canada comprises the world's ninth largest, and North America's second largest, pharmaceuticals market, boasting sales of 21.6 billion U.S. dollars (approximately 1.64 trillion yen) in 2010 and a growth rate of 3%. Healthcare in Canada is provided primarily under a publically-funded universal health insurance system known as Medicare, which is managed at the provincial or territorial level. Accordingly, the reimbursement of prescriptions medicines under this public system differs depending on the province or territory. In provinces or territories where prescriptions are not covered by Medicare, prescription fees are reimbursed under private healthcare insurance or with public funds under a separate local government-run public drug reimbursement scheme. 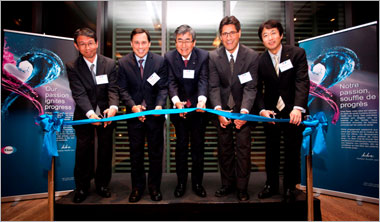