The Compound, a small molecule that inhibits CBP/β-catenin complex formation, was discovered using PRISM's proprietary intracellular protein-protein interaction inhibitor/modulator library. Phase Ia/Ib clinical trials of the Compound were initiated in the United States in March of this year1).

In accordance with advancements in genetic science, scientists have identified proteins that are related to the growth of cancer cells. Against this backdrop, much research is currently being conducted to investigate the involvement of the Wnt signaling pathway in cancer onset and progression. CBP (CREB (cyclic AMP Response Element binding protein) binding protein) is a transcription cofactor that binds to β-catenin, a transcription factor activated by extracellular stimulation. Homeostatic activation of the Wnt/β-catenin signaling pathway triggers cancer onset, with these mutated pathway proteins often found in cancer cells. This has led investigators to study the use of substances that inhibit this pathway as potential novel anticancer agents, with small molecules and biological agents reportedly having demonstrated inhibitory activity thus far2), 3).

Eisai defines oncology as a therapeutic area of focus and is committed to the development of novel anticancer agents and treatments for supportive care. With the conclusion of this agreement, Eisai seeks to make further contributions to address the diversified needs of and increase benefits provided to cancer patients and their families as a well as healthcare professionals.

PRISM BioLab Corporation, established in 2006 and headquartered in Yokohama, is a bioventure company focused on the development of novel therapeutic compounds using a unique small molecule platform technology that is capable of regulating protein-protein interaction.

Wnt is a glycoprotein that plays a central role in axis formation, central neurogenesis and organogenesis. The name Wnt was coined due to the protein's shared homology with the wingless gene which was originally identified as a mutation of Mouse Mammary Tumor Virus infected breast cancer causing genes and involvement in segment formation of drosophila (fruit fly). Pathways known to comprise the Wnt signaling pathway include the Wnt/β-catenin pathway which is associated with cell differentiation and dorsal formation, the Wnt/PCP pathway which is involved in planar cell polarity and motility during gastrulation, the Wnt/Ca2+ pathway which plays a role in embryonic isolation, and the pathway involved in the regulation of muscle regeneration.

Catenin is a cytoskeletal-associated protein that is known to come in several subtypes (α、β、and γ). β-catenin not only plays an important role in catenin-mediated cell binding and cytoskeletal formation, it is also involved in gene expression regulation as a component of the Wnt signaling pathway. While the amount of β-catenin expressed is normal cells is regulated, the impairment of regulation mechanisms in various cancer cells is known to lead to an increased amount of intracellular β-catenin, which is characteristic of tumor tissue4).

The following diagrams illustrate how the above-mentioned factors mutually interact with each other.
(PRI-724 is one of CBP/β-catenin inhibitor) 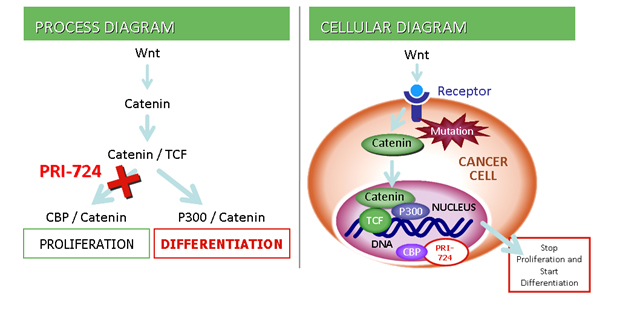 Eisai oncology consists of 1) Oncology PCU (Product Creation Unit), 2) Morphotek, Inc. and 3) H3 Biomedicine Inc. The relationship and research focuses of these functions are shown below. 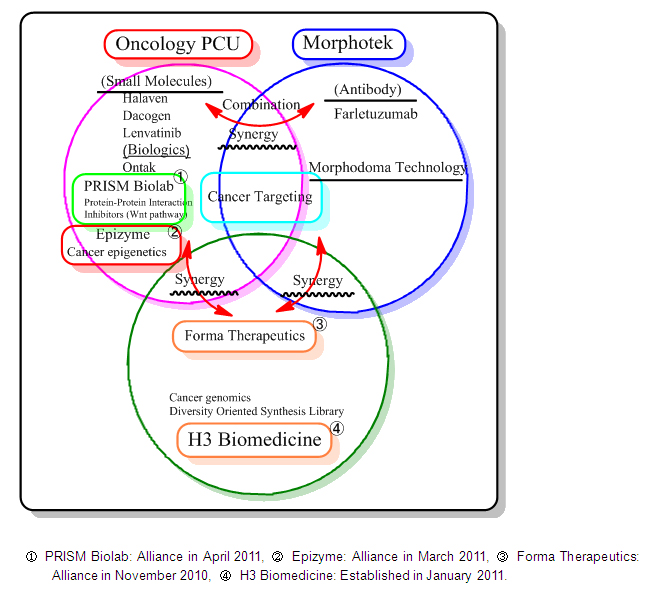