（Production of SKAINAR® AL TABLETS ended as of April 2018.）

Eisai Co., Ltd. (Headquarters: Tokyo, President & CEO: Haruo Naito) announced today that it will launch Skainar® AL Tablets (Class 2 Pharmaceutical Product), an over-the-counter allergy medication for the relief of rhinitis and skin-related allergic symptoms caused by hay fever and other allergies, on January 11. The new tablets are being introduced as part of the Skainar® Series, a family of products indicated for the treatment of rhinitis.

Skainar® AL Tablets contain azelastine hydrochloride as an active ingredient to inhibit the excessive production and release of histamine and leukotriene, two chemicals responsible for causing allergic symptoms, and are effective in treating nasal congestion, runny nose and other rhinitis symptoms caused by allergies to pollen and house dust. Expressed when pollen and other allergens enter the body, histamine and leukotriene not only bring on symptoms such as nasal congestion and runny nose, they may also induce severe or chronic reactions. However, by starting to take Skainar® AL Tablets early on in the pollen season at the first sign of symptoms or while symptoms are still mild, allergy sufferers can prevent the development of severe nasal congestion, runny nose and other symptoms and achieve effective allergy relief.

The number of people who suffer from hay fever has been on the rise in recent years, with 2009 data showing that its prevalence has increased 1.5-fold over the past ten years. Eisai has expanded the Skainar® Series for the treatment of rhinitis to include Skainar® Spray for Rhinitis and Skainar® S Tablets for Rhinitis since launching Skainar® N Tablets for Rhinitis in 2001, and currently markets Crystal Veil and Crystal Veil Cool, topical allergen screen gels for protection against pollen and house dust. By providing these products as allergy relief options, Eisai will continue to address the diversified needs of allergy sufferers.

Alleviation of the following allergic rhinitis symptoms caused by allergens such as pollen and house dust:

Alleviation of the following symptoms caused by hives, eczema or rash:

Take the following doses after breakfast and before bed with a glass of hot or cold water.

6. Manufactured and Distributed By: 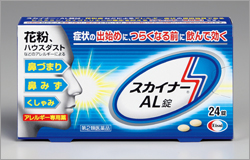