SymBio Pharmaceuticals Limited (Headquarters: Tokyo, President & CEO: Fuminori Yoshida, “SymBio”) received marketing approval for TREAKISYM® on October 27 of this year. The drug was today added to Japans National Health Insurance drug price list and will be marketed by Eisai in Japan based on a licensing agreement concluded between the two companies.

Eisai has established a Japan-based oncology promotion framework under which oncology information specialists have been assigned to each area and all of the approximately 1400 medical representatives (MRs) stationed around the country will provide information on anticancer therapies. The company will also work to ensure that a use results survey (all-case surveillance), a condition under which TREAKISYM® was approved, is carried out smoothly and promote the safe and efficacious use of the drug.

TREAKISYM® is a novel anticancer agent that exhibits nitrogen mustard-derived alkylating activity and antimetabolic-like activity. Clinical studies conducted in Japan showed that the agent offers excellent efficacy, has a high response rate, and significantly extends the duration of progression-free survival. More importantly, it is the first single agent for which patients with mantle cell lymphoma demonstrated a complete response. While the most frequently reported adverse reactions associated with TREAKISYM® include myelosuppression, nausea, vomiting, infection, vasculitis and angialgia, the agent maintains a manageable and highly tolerable safety profile. In Japan, SymBio is currently conducting Phase II clinical studies with the agent in relapsed and refractory intermediate- and high-grade B-cell non-Hodgkins lymphoma and untreated multiple myeloma as part of an indication expansion program.

Non-Hodgkin's lymphoma strikes an estimated 12,000 people in Japan each year, with the number of cases increasing in recent years. It is well known that many low-grade non-Hodgkins lymphoma patients are prone to repeated relapse after responding to initial treatment, making further treatment difficult despite extended overall survival. Mantle cell lymphoma is one of the rarest types of lymphoma. As most patients present with advanced stage disease, a common standard of care has yet to be established.

Eisai positions oncology as a therapeutic area of focus. Following the debut of its first anticancer agent TREAKISYM®, Eisai plans to continue to expand its portfolio of oncology products with agents such as eribulin (generic name), the company's first in-house developed anticancer agent currently under regulatory review for the treatment of breast cancer, thereby making contributions to addressing the diversified needs of cancer patients and their families.

Bendamustine hydrochloride is an anticancer agent originally synthesized by German (formerly ‘East German’) pharmaceutical company Jenapharm and is marketed in Europe under the brand names Ribomustin® and Levact® as a treatment for non-Hodgkin's lymphoma, multiple myeloma and chronic lymphocytic leukemia. In the United States, the agent is marketed under the brand name TREANDA® as a treatment for chronic lymphocytic leukemia and relapsed indolent B-cell non-Hodgkin's lymphoma.

Eisai concluded an exclusive licensing agreement with SymBio in August 2008 concerning the joint development and marketing of bendamustine hydrochloride in Japan, which was followed by a subsequent agreement between the two companies in May 2009 concerning the development and marketing of the agent in Singapore and South Korea. The agent has been marketed in Singapore by Eisais Singapore subsidiary Eisai (Singapore) Pte. Ltd. since September of 2010 under the brand name of Symbenda® for the treatment of low-grade non-Hodgkins lymphoma and chronic lymphocytic leukemia.

For the treatment of relapsed or refractory:

The usual adult dose of bendamustine hydrochloride is 120 mg/m2 (body surface area) infused intravenously on Days 1 and 2 of repeated 21 day cycles. The dose may be reduced appropriately according to the condition of the patient. 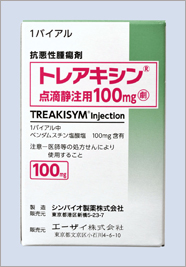 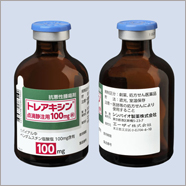