Eisai Co., Ltd. (Headquarters: Tokyo, President & CEO: Haruo Naito, “Eisai”) announced today that it has signed a statement of intent with the World Health Organization (WHO) to supply free of charge of a primary medicine for the treatment of lymphatic filariasis. The statement was signed by Mr. Haruo Naito, Eisai President and CEO, and Dr. Margaret Chan, Director-General of WHO. This is the first time a Japanese pharmaceutical company has established a partnership with WHO in an effort to combat the global health issue of neglected tropical diseases.

In the statement of intent, Eisai agreed to produce and supply to WHO free of charge up to 2.2 billion 100 mg tablets of diethylcarbamazine (generic name, “DEC”), a medicine used to treat lymphatic filariasis, in accordance with the high quality standards of WHO, over a six year period between 2012 and 2017. This is in line with WHO’s forecast for the number of DEC tablets needed to help eliminate lymphatic filariasis in epidemic countries over this period. Production of the medicine is planned at Eisai’s Vizag Plant in India. Eisai is working with WHO to finalize details of this program with the aim of executing an official contract with WHO in the near future.

“Eisai's commitment to provide DEC greatly improves prospects for interrupting the transmission of lymphatic filariasis,” said Dr. Margaret Chan, Director-General of WHO. “This contribution will eventually close the gap in drug availability, particularly for poor countries where most cases of this disease occur and the burden on health and society is greatest”.

Lymphatic filariasis can be treated with a combination of two out of three anti-parasitic agents, one of which is DEC. Research has shown that large-scale interventions in which all inhabitants of endemic areas are administered DEC once a year for at least five years is effective in eliminating the disease. Despite this, the current insufficient supply of DEC has hindered global elimination efforts. As a global pharmaceutical company committed to improving health of all individuals worldwide, Eisai has decided to manufacture and supply DEC free of charge to WHO.

Lymphatic filariasis is a parasitic disease that is transmitted to humans by the bite of a mosquito. Once transmitted, it causes lymphatic dysfunction that leads to other serious physical disabilities such as elephantiasis, a severe condition in which a patient’s lower extremities swell up to resemble those of an elephant. Japan succeeded in eliminating lymphatic filariasis in the late 1970s as a result of initiatives carried out by the government in partnership with the public-private sector and became the first country in the world to demonstrate the successful achievement of lymphatic filariasis elimination using DEC. Currently, the disease still affects an estimated 120 million people in 81 countries worldwide, most of whom live in developing and emerging nations in Africa and South East Asia. Lymphatic filariasis is one of the most severe and debilitating infectious diseases known to humanity, with heavy economic costs, immobility and billions of dollars in lost productivity in endemic countries.

As a human health care (hhc) company, Eisai remains committed to proactively taking measures to help solve global health and health care problems such as neglected tropical diseases and the issue of access to medicines, and will continue to make further contributions to increasing the benefits provided to patients and their families worldwide.

[ Please refer to the following notes for further information regarding lymphatic filariasis, neglected tropical diseases, and the issue of access to medicines ]

Lymphatic filariasis is a parasitic disease that is transmitted to humans by the bite of a mosquito. Once transmitted, it causes lymphatic dysfunction. While infection is usually acquired during childhood, symptoms gradually appear over several years, with the most serious manifestations of the disease occurring in adulthood. The most serious manifestation, known as elephantiasis, is a permanent physical disability in which a patient’s lower extremities swell to resemble those of an elephant. In addition to impacting a patient’s ability to perform everyday tasks, it historically has led to many patients falling victim to social persecution due to biases against the disease. The disease also causes patients and their families much emotional distress. Nowadays, lymphatic filariasis affects an estimated 120 million people in 81 countries worldwide, most of whom live in developing and emerging nations in Africa and South East Asia. The disease has been proven to have existed in Japan since the Heian Period (794-1184). However, Japan succeeded in eliminating lymphatic filariasis in the late 1970s as a result of initiatives carried out by the government in partnership with the public-private sector and became the first country in the world to demonstrate the successful achievement of lymphatic filariasis elimination using DEC.

WHO defines 17 tropical diseases including lymphatic filariasis, Chagas disease, and dengue fever, as neglected tropical diseases. Neglected tropical diseases are often caused by poor hygiene and living conditions, infecting roughly one billion people worldwide. Widely endemic in developing countries where poverty is rampant, these “neglected” diseases often bring about human rights violations related to social persecution and economic suffering subsequent to the symptoms of disease. Today, research intimates that climate change and recent increases in migration due to global economic growth have exacerbated the rate of infection among those at risk, thus further highlighting the need for global efforts aimed at neglected tropical disease elimination.

The issue of access to medicines refers to the problem in which essential medicines are inaccessible to patients in need of them due to poverty and problems with healthcare infrastructure. It is estimated that 1.4 billion* people live in extreme poverty and a further 1.3 billion* live on US$ 2 or less per day. Most of these 2.7 billion people do not have access to essential health care and medicines. This is an international challenge that needs to be solved through collaborations not only between non-profit entities and international organizations like the WHO, but also in partnership with pharmaceutical companies.

Photographs of Eisai President and CEO Mr. Haruo Naito and WHO Director-General Dr. Margaret Chan signing the statement of intent

You must have an unzip utility to extract and view downloaded files. 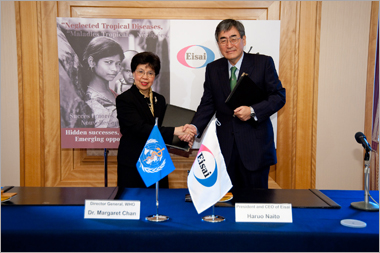 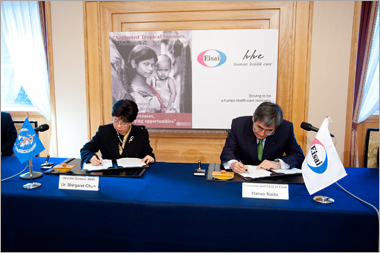