（Production of CRYSTAL VEIL COOL ended as of June 2017.）

Crystal Veil can be used as a preventative measure against airborne allergens such as pollen and house dust by applying a single drop the size of a sesame seed around the nostrils. It is a product whereby the principal ingredient, positively charged water-soluble polymer, imparts an invisible filter-like screen of positively charged ions to effectively block such particles from entering the nasal passages. As Crystal Veil is applied with the fingertips, it can be used easily anytime and anywhere. It is also drug-free and can therefore be used by people who may be unable to take medicine such as children, pregnant or breastfeeding women, and those who drive vehicles. In its first year on the market, Crystal Veil was used by over one million hay fever or allergy sufferers, many of whom rated it highly because it was unnoticeable and easy to apply, and because it provided them with effective relief during the hay fever season.

The soon-to-be-launched Crystal Veil Cool is an allergen screen topical gel containing menthol. With its invigorating menthol fragrance providing a refreshing and cooling sensation, the new product fulfills the needs of those people who want to remain clearheaded throughout a time of year where many people suffer from hay fever and other allergies, and offers them a means to enjoy a more comfortable life.

Eisai recently added Crystal Veil as a new drug-free preventative measure against pollen and house dust to its “Skainar Series,” a range of over-the-counter drug products for the alleviation of allergic symptoms such as sinus infections, and is now marketing the complete series for the prevention and relief of nasal symptoms. By further enhancing the “Skainar Series” product lineup with the addition of Crystal Veil Cool, Eisai hopes to meet the diversified needs of consumers and make further contributions to increasing their benefits. 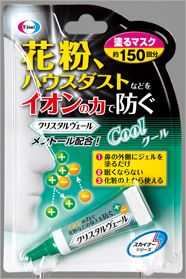