The new single-storey, 60,000-square-foot (approximately 5,574 square meters) pilot plant will be constructed on a site adjacent to the existing Morphotek headquarters building. The facility is being established to strengthen Eisai's product creation activities through the in-house production of biologics, which will in turn support the continuous clinical introduction of the companys new antibody therapies. Upon completion of the new facility, Eisai, who previously outsourced the production to external contract manufacturing organisations, will be able to carry out its product creation activities more efficiently by manufacturing biologics in-house. Eisai will invest about $80 million in this new facility, which is scheduled for completion around the middle of 2011. Full operations are expected to begin by the end of 2012.

■Rendering of the New Pilot Manufacturing Plant for Biologics Production 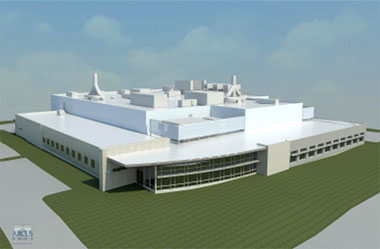