Coldness and stiff shoulders are common symptoms especially seen in women. Poor peripheral blood circulation is often considered a cause of these symptoms. In general, women are prone to having poorer peripheral blood circulation than men due to differences in physical structure, including narrower blood vessels and smaller amounts of muscle. In addition, it is known that hormone imbalances as well as difficulties in modulating the autonomic nervous system caused by factors such as overexposure to air-conditioned environments can result in poor peripheral blood circulation. According to a survey that Eisai conducted in Japan with women in their 20s and 30s*, more than half of them have symptoms of coldness in the extremities and stiff shoulders. (*conducted in January 2008, n=4,838)

Eisai markets various products that address the needs of women, including the Chocola BB brands. By introducing “Hotmin®”, which provides relief of symptoms for women that result from poor peripheral blood circulation, Eisai will continue to increase benefits to women in Japan.

[Please see the following notes for the product information and image]

Dosage and Administration:
For an adult (15 years old and older), Hotmin® should be taken once or twice daily (2 tablets as single dose) with cold or hot water. When taken twice daily, dosage should be administered in the morning and in the evening. 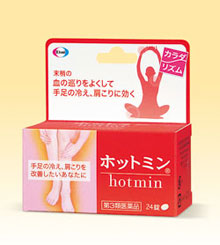 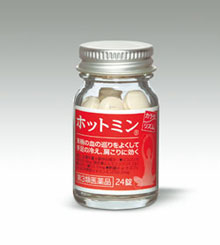