“Chocola BB® Royal 2” is the latest product in Eisai's Chocola® BB drink series, the company's core nutritional drink brand, which contains a vitamin B complex to support the “TCA cycle” (an energy production system in the human body). “Chocola BB® Royal 2,” an improved formula of “Chocola BB® Royal,” which was originally introduced in 2001, was developed with a focus on reducing extreme fatigue for women.

The new formula of “Chocola BB® Royal 2” contains vitamin B2, which facilitates the action of the “TCA cycle,” while adding amino acids (L-arginine hydrochloride and L-lysine hydrochloride) to promote fat metabolism, which reduces symptoms of fatigue. In addition, the calories of the new drink have been cut down to 7.3 kcal per bottle with the same nutritional function and flavor maintained.

In addition to the above quasi-drug products, Eisai introduced “Chocola BB® Drink Ⅱ” in 2004 as an over-the-counter drug effective against skin roughness and acne.

Through enhancement of Chocola® BB drink series, Eisai continues to deliver on its commitment to supplying high quality products that address consumer needs and developing market for nutritional drink for women.

[ Please see the following note for the product information and image ] 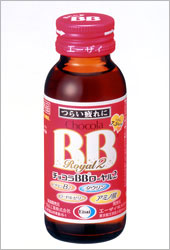