In the treatment of severe AD, dose of Aricept® is increased to 10 mg once daily, after four weeks and later at 5 mg. Currently, Aricept® is marketed in 3 mg tablet or 5 mg tablet formulations. With introduction of 10 mg tablets, one tablet a day administration treatment becomes available for all stages of AD (mild, moderate and severe) which can be beneficial for the patients and their families, as well as their caregivers.

Aricept®, an acetylcholinesterase inhibitor developed by Eisai Co., Ltd., is the only approved prescription medicine for the treatment AD in Japan. It is believed to work by inhibiting the breakdown of acetylcholine, thereby increasing available levels of this chemical in the brain. There is an established association between the loss of acetylcholine, a brain chemical involved in memory and thinking, and AD. In Japan, it has been reported that approximately 1.25 million people have been affected by AD and approximately 300,000 of those are in the severe stage.

Eisai is committed to increase further clinical value of Aricept® in medical practice and to make further contributions to increasing benefits for patients in all stages of AD and their families.

[Please see the following note for information on Aricept®]

In the United States., Aricept® received approval for the treatment of severe Alzheimer's disease in October 2006. Since then, Aricept® indication for severe AD has been approved in India, Philippines, New Zealand, Canada, Australia and Thailand. 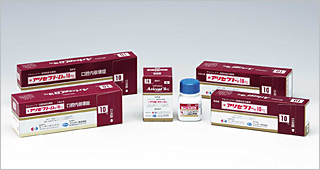