Eisai Co., Ltd. (Headquarters: Tokyo, CEO: Haruo Naito, “Eisai”) announced today that Eisai has signed the Kigali Declaration announced at the Kigali Summit on Malaria and Neglected Tropical Diseases (NTDs) on June 23, 2022 in Kigali, the capital of the Republic of Rwanda, and expressed Eisai’s continued support for the elimination of NTDs towards the achievement of a road map for NTDs 2021-2030 launched by the World Health Organization (WHO). Based on the human health care (hhc) philosophy, Eisai has positioned the elimination of NTDs as an important area of focus and aims to achieve social good in the form of reducing health disparities (please click here to watch the message video).

Also, Eisai’s CEO Haruo Naito has been appointed as one of the “100 Global Leaders Committed to Eliminating NTDs”.

NTDs include 20 diseases that the WHO identifies as tropical diseases which human race must overcome. In 2012, the pharmaceutical companies, the Bill & Melinda Gates Foundation, the WHO, the U.S. Agency for International Development (USAID), the U.K. Department for International Development (DFID), the World Bank, and governments of NTD-endemic countries pledged their support to the London Declaration, a coordinated effort to eliminate NTDs and the largest international public-private partnership in the field of global health to date. Since the London Declaration, the pharma industry has contributed to the elimination of NTDs via supply of medicines which resulted in donation of 14 billion high-quality treatments. Also, tremendous achievements have been made through NTDs elimination activities of public-private partnership. Forty-six countries have eliminated at least one NTD and 600 million people no longer require interventions against NTDs. Despite such progress, more than 1.7 billion people remain threatened by NTDs and continuous coordinated effort through strong partnership is needed.

The Kigali Declaration, the successor of the London Declaration, is commitment of stakeholders for the elimination of NTDs. Through people-centered approach by multi-sectoral partnerships, the Kigali Declaration aims to meet the United Nation’s Sustainable Development Goal (SDG) 3.3 target on NTDs and achieve the targets of the WHO’s road map for NTDs 2021-2030 by eradicating two NTDs, eliminating at least one NTD in 100 countries and decreasing the number of people requiring interventions for NTDs by 90%. Thereby, decrease in suffering, poverty, disability and prejudice of people due to NTDs as well as improvement of participation in society is expected.

Eisai has been manufacturing and supplying diethylcarbamazine (DEC) tablets, a lymphatic ﬁlariasis (LF) treatment, free of charge to the WHO for the elimination of LF. To date, 2.05 billion DEC tablets manufactured at Eisai's Vizag Plant in India have been supplied to 29 countries (as of May 2022). Although LF has been eliminated in 17 countries and the number of infected people has declined by 74% since 2000, 860 million people worldwide are still exposed to the risk of infection. Eisai is committed to providing DEC tablets for free to endemic countries that need DEC until LF is eliminated in these countries. Furthermore, Eisai is working on comprehensive approaches such as support for the mass drug administrations (MDAs), disease awareness and improvements in sanitation.

Furthermore, Eisai is proactively engaged in development of new treatments for NTDs through partnerships with global research organizations. Utilizing the funding from the Global Health Innovative Technology Fund (GHIT Fund) and others, Eisai is conducting joint development of new treatments such as a new treatment for LF in collaboration with the Liverpool School of Tropical Medicine and the University of Liverpool as well as treatments for mycetoma and leishmaniasis in collaboration with the Drugs for Neglected Diseases initiative (DNDi).

Based on hhc philosophy, Eisai further strengthens collaborations with global partners and aims to realize a world without burden of NTDs.

Neglected Tropic Diseases (NTDs) include 20 diseases that the WHO identifies as tropical diseases which human race must overcome. More than 1.7 billion people living in the poorest and most marginalized communities worldwide are exposed to the risk of NTDs infection. The spread of NTDs is mainly caused by poor hygienic conditions associated with poverty. Infections from these diseases may result in serious physical impairment and this often results in normal economic and social activities becoming highly challenging to the individual. In the worst cases, NTDs may also result in death. The prevalence of NTDs is a stumbling block to economic growth for developing and emerging countries and represents a serious issue for these regions.

On January 30, 2012, the CEOs of 13 pharmaceutical companies*, the Bill & Melinda Gates Foundation, the WHO, the U.S. Agency for International Development (USAID), the U.K. Department for International Development (DFID), the World Bank, and officials from NTD-endemic countries gathered in London to pledge their support for a coordinated effort to combat 10 NTDs**. The London Declaration represents the largest international public-private partnership in the field of global health to date, and has made tremendous achievements by committing to working collaboratively in an effort to comprehensively tackle issues pertaining to drug supply, distribution, development, and implementation programs as it seeks to more effectively combat NTDs. As a result, forty-six countries have eliminated at least one NTD and 600 million people no longer require interventions against NTDs.

As the successor of the London Declaration on NTDs launched in 2012, the Kigali Declaration represents a collective commitment from stakeholders to fight against NTDs and was announced at the Kigali Summit on Malaria and NTDs alongside of Commonwealth Heads of Government Meeting (CHOGM) in June 2022 in Kigali, the capital of the Republic of Rwanda. To achieve the WHO’s road map for NTDs 2021-2030, the Kigali Declaration aims to tackle NTDs comprehensively and sustainably by sustaining a multisectoral and multidisciplinary approach through public-private partnership, strengthening country ownership including establishment of local health system and domestic financing, accelerating research and development of treatments and diagnostics for NTDs, and ensuring equitable access to these NTDs related products and services. (Please click here to watch “#NeglectedNoMore: A Historic Partnership in the Fight Against NTDs” video.)

Lymphatic filariasis (LF) is an NTD transmitted to humans via carrier mosquitoes. LF causes lymphatic dysfunction and can lead to the swelling of body parts such as legs, and cause severe pain, permanent disability and social stigma associated with disfiguring visible manifestations. As a result, patients suffer mental, social and financial losses. It is estimated that 860 million people worldwide, mainly those in developing countries, are exposed to the risk of LF. Elimination of LF is possible by stopping the spread of the infection through MDAs of three types of LF treatments including DEC tablets.

5. About Eisai's Commitment to Improving Global Access to Medicines including LF Elimination Program

The Eisai’s corporate philosophy is “to give first thought to patients and people in the daily living domain, and to increase the benefits that health care provides to them”. Under this philosophy, Eisai aims to effectively achieve social good in the form of relieving anxiety over health and reducing health disparities. One of the social good that Eisai is focusing on is the elimination of NTDs, which is a target (3.3) of the United Nations Sustainable Development Goals (SDGs), with the aim of reducing healthcare disparities.

Since 2010, Eisai has been working on the elimination of LF, an NTD, through free provision of LF treatment and disease awareness with global partners such as the WHO and the Bill & Melinda Gates Foundation. Also, Eisai is moving ahead with new drug development projects targeting malaria and NTDs such as mycetoma and LF, based on partnerships with international non-profit organizations such as the Drugs for Neglected Diseases initiative (DNDi) and Medicines for Malaria Venture (MMV), as well as research organizations such as Liverpool School of Tropical Medicine, University of Kentucky, and the Broad Institute (please refer to the table below). Furthermore, Eisai co-established the Global Health Innovative Technology Fund (GHIT Fund), Japan's first public–private partnership to advance development of new health technologies for the developing world, is a member of the World Intellectual Property Organization (WIPO) Re:Search Consortium, an international joint enterprise for the development of treatments for NTDs, malaria and tuberculosis led by WIPO, is a signatory to the Tuberculosis Drug Accelerator (TBDA) partnership, and is participating in the Access Accelerated initiative to promote prevention and treatment of non-communicable diseases.

In November 2010, Eisai agreed to supply a total of 2.2 billion DEC tablets to the WHO free of charge by 2020, as there was a global shortage of high-quality DEC tablets for use in MDAs. In 2012, Eisai became the only Japanese company to participate in the London Declaration, a coordinated effort to eliminate 10 NTDs and the largest public-private partnership of its kind in the field of global health. At the London Declaration’s fifth anniversary event held in April 2017, Eisai announced its plan to supply DEC tablets continuously beyond 2020, until LF is eliminated in all endemic countries where DEC tablets are needed.

Eisai has supplied 2.05 billion tablets to 29 countries through the WHO’s elimination program (as of May 2022). Furthermore, in order to support the smooth implementation of the WHO’s MDA programs, Eisai is engaging in initiatives to raise public awareness of LF in endemic countries. Staff members of Eisai Group cooperate with the relevant representatives in endemic countries to eliminate LF as early as possible. 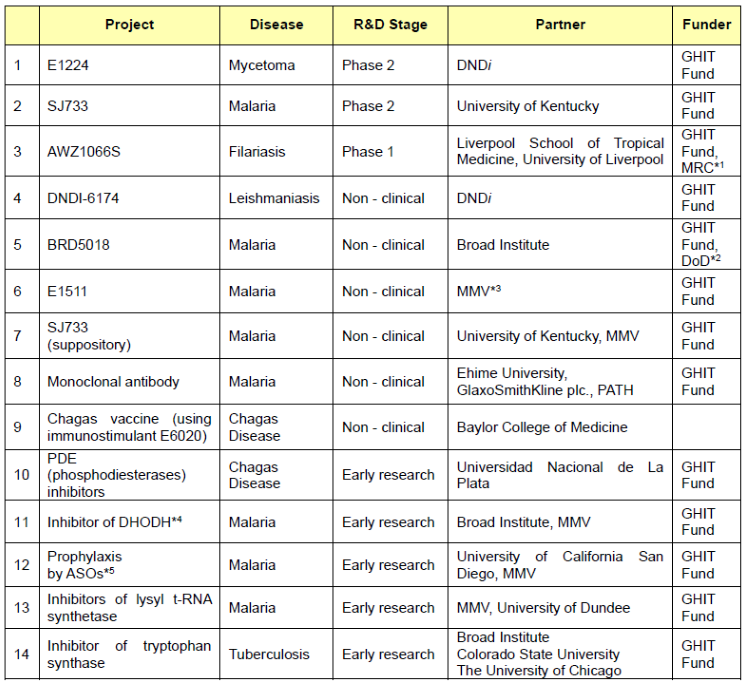